Substance use disorders are, well, complicated.

Each example made unique by the substance itself and the person dependent on it. Every statistic represents the distinct narrative of another person’s journey into a disorder now deemed a disease, and their level of desire to stay there.

The cases themselves may be unique, though they are becoming all too common. The latest data shows 1 in 12 adults have a substance use disorder.

Defining the substance use disorder.

In the realm of substance use disorders (SUD), the substance itself is a mind-altering chemical compound. When used inappropriately, the chemical effects can harm one’s mental and physical health. It also changes social interactions, the extent of which will range dramatically. On the extreme end, you will find excessive usage and severe addiction.

Even the risk for addiction varies by substance, changing the rate at which you may become addicted. Some, such as opioid painkillers, present a higher risk and cause addiction more rapidly than others.

The American Psychiatric Association (APA) breaks down substance use disorders into three levels of severity, mild, moderate, or severe. Further defining the disorder as a medical illness, one of habitual use of an intoxicating substance. Once the addiction interferes with daily life activities, the disorder will be scored using 11 different diagnostic criteria to determine the level of the SUD. The criterion can also be helpful for loved ones trying to identify a SUD, with questions as basic as ‘has time for hobbies been reduced?’ 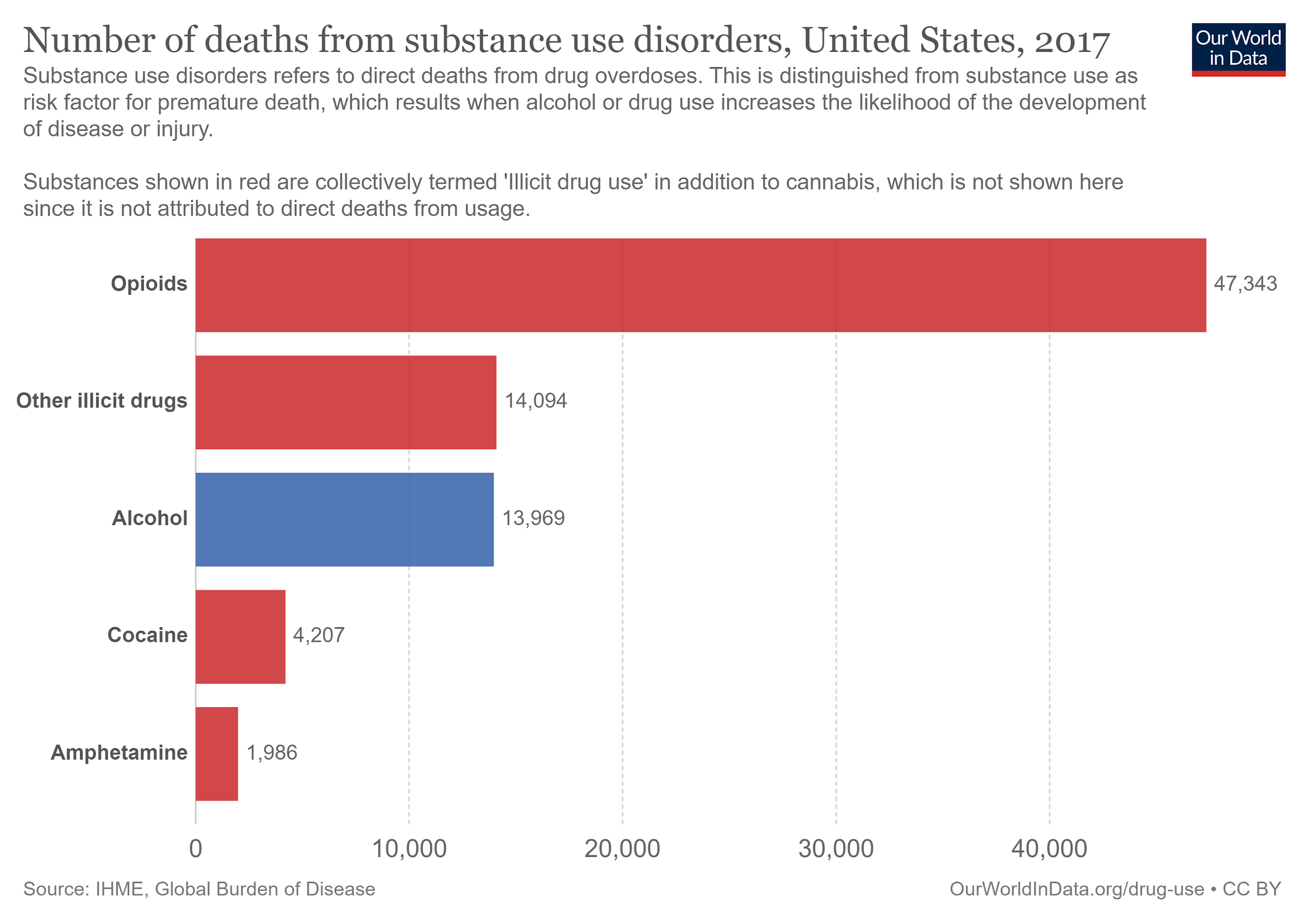 The death toll related to substance use disorders is staggering. In 2018, the number of deaths from opioids was even higher.  [Image from Our World In Data.]

Is it more than drugs and alcohol?

According to the 2018 Surgeon General’s Report on Alcohol, Drugs, and Health, 165 million people in the U.S. are using alcohol, tobacco, opioids, prescription drugs or illegal drugs. That means nearly 2 out of 3 people are substance users, with 1 in 5 (or 53 million) specifically using illegal drugs or misusing prescription medicine.

Among the many substance users, those living with a diagnosed disorder remains merely a fraction of the sum. Current data recognizes 20.8 million Americans ages 12 or older who have a SUD, with alcohol and tobacco in the lead. However, illegal drugs are not far behind according to the National Center for Drug Abuse Statistics (NCDAS). Among the illegal drugs, marijuana, prescription medications (pain relief or stimulants), other opioids and methamphetamines are most prevalent.

It is worth mentioning that among those with a SUD, 2 million are battling an opioid disorder, essentially prescription pain meds and/or heroin. What is even more harrowing is almost 70% of the more than 67,000 drug overdose deaths in 2018 involved an opioid. 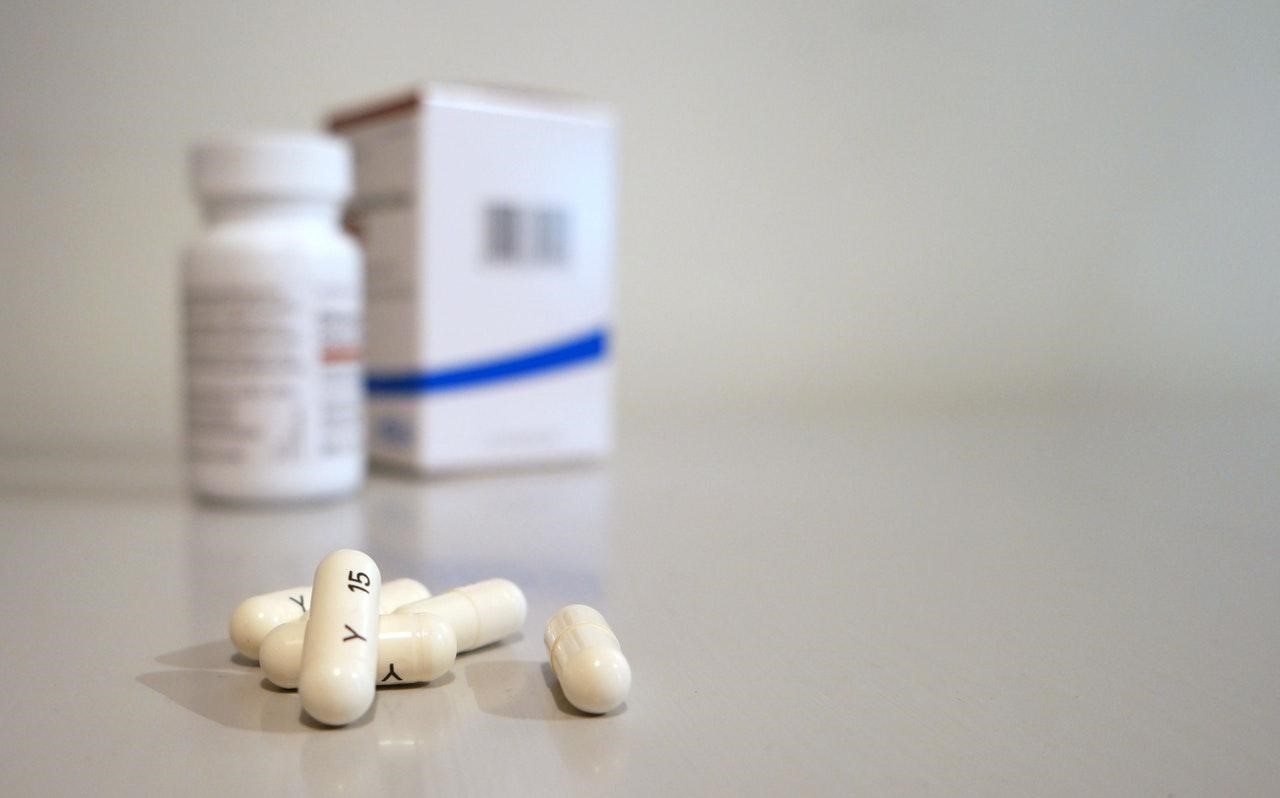 Substance use disorders do not discriminate. Not against race, sex, or age.

According to the NCDAS, drug use is highest among the 18-25 (39%) and 26-29 (34%) year olds. Yet illegal drugs are introduced even earlier. Data shows 47% of our youth try an illegal drug before graduating high school, including 5% of eighth graders and 20% of tenth graders.

Research shows that when children try an illegal drug before age 13, nearly 2 in 3 will succumb to a substance use disorder. Vastly different than the 1 in 4 rate for those who hold off until after their seventeenth birthday. Yet another reason early education and intervention are key substance use Treatment (SUT)

That being said, addiction may begin at any age.

What can you do to help?

Awareness and knowledge is a great first step. Become familiar with the signs and symptoms of a substance abuse disorder. Reach out to a friend or family member to let them know you need help. Or, if you are that loved one, let them know you are there to support them.

Whether you are seeking out this information for yourself or a loved one, we encourage you to check out our directory to find a treatment provider near you.

Jessica Corwin is a wife, mom of three, and lover of words. Serving as a public health educator in West Michigan for the past decade has provided Jessica with the experience necessary to write with a humble and realistic perspective. Teaching everywhere from food pantries to upscale kitchens, on topics ranging from chronic disease to culinary medicine. The fact that she is a Registered Dietitian-Nutritionist and Certified Health and Wellness Coach, merely adds a splash of credibility to her words. View all posts by Jessica Corwin, MPH, RDN, CHWC

One response to “Substance Use Disorders 101”